This encompassing and groundbreaking tour will spend 19 days traveling in Chad throughout the mind-blowing Ennedi Region of the north along the rock art, desert and sand crocodiles and the wildlife-rich and exclusive Zakouma National Park in the south. Combining these two diverse and special regions make for a once-in-a-lifetime journey. 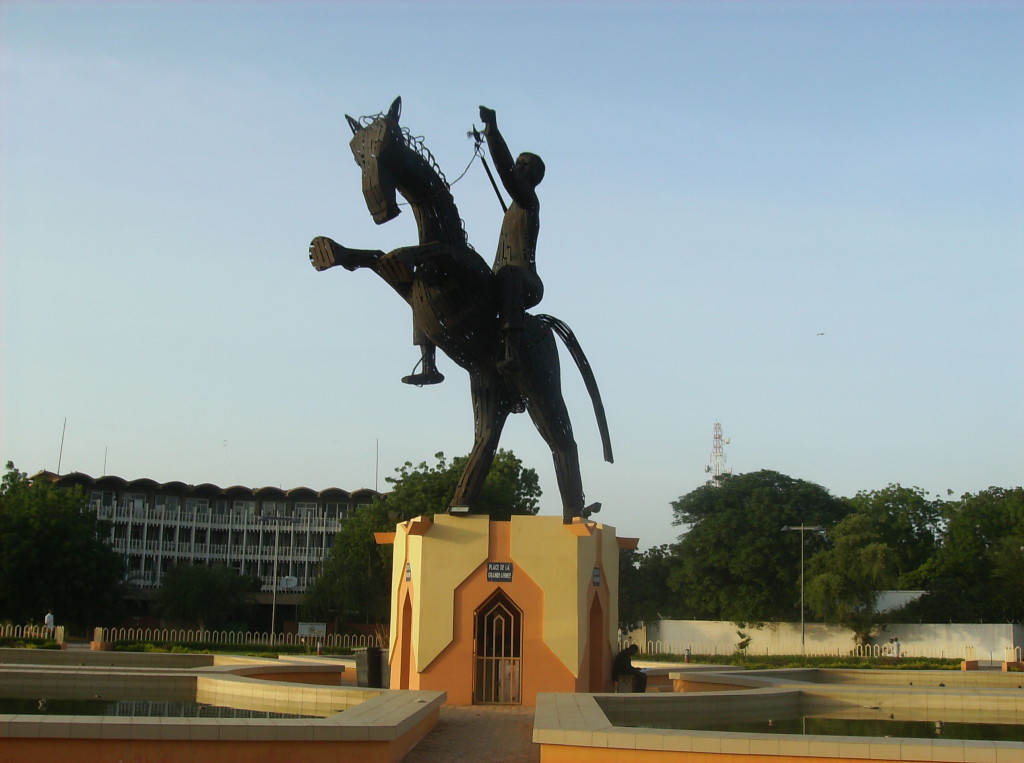 Day 1, 2 & 3: N’Djamena, Salal and Kalaït
We begin our Chad tour arriving in N’Djamena on an early morning flight and be met by our guides for the the adventure ahead.

From N’Djamena,  we follow the big track running into the alluvial plains of the Lake Chad as far as Massaguet, where we begin to follow the track towards Moussoro, in the Kanem region. The landscape, between the savannah and the Sahel, crossed by numerous temporary water-courses and flooding plains, evidence of the ancient Paleochad system, is characterized by a various and luxuriant vegetation, represented by several kinds of acacias (Raddiana, Nilotica, Balanites Haegiptiaca), by callotrophis (Meli of Sodoma) and by small forests of doum palms (Hiphaene Tebaica). People, here, are represented by Kanembou, Peul, Kanouri, Kereda and Daza. 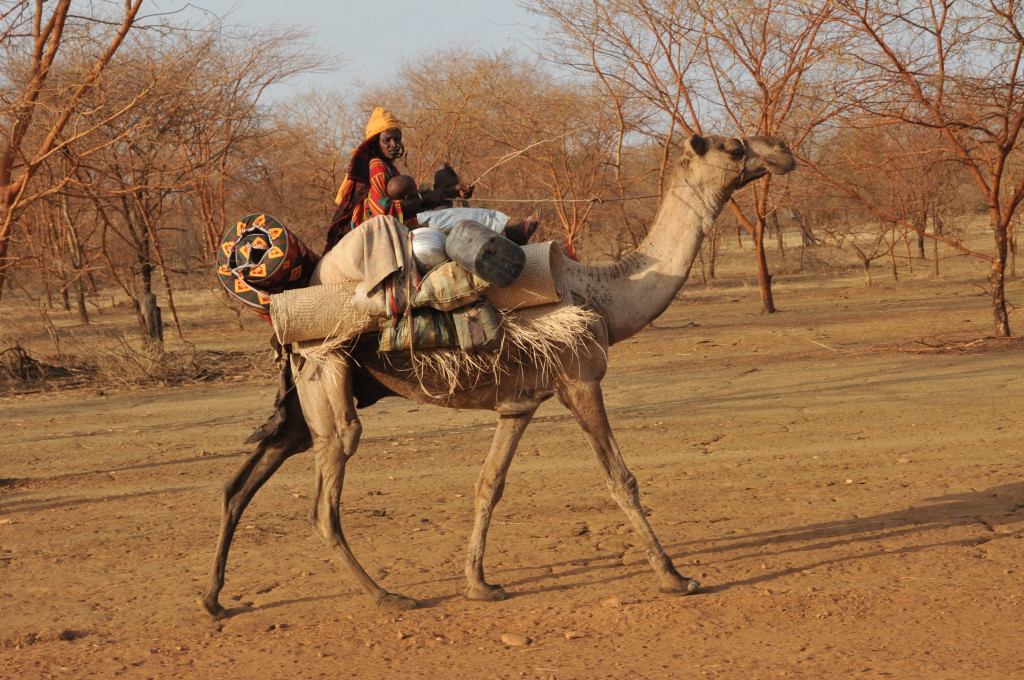 The track follows and then skirts the depression of the Bahr el Ghazal, the gazelles’ river, an ancient effluent river of Paleochad period. Where there is water the human work is always surprising, like in the luxuriant gardens of “Cheddra”.

After the small villages of Salal and Koubba Oulanga, we continue eastward; the ground and the landscape become completely Sahelian, but are characterized by a very wild Sahel rich in animals (gazelles, bustards, hyenas and jackals). The environment is almost devoid of settlements, except for a few huts of Arab nomads, living off stock-raising and wild graminaes picking. The track, that follows the natural course of the Oued Achim, ends in Oum Chalouba village; nowadays, after the sad war vicissitudes that found in this place an important Libyan military-base, the local population preferred to move to the nearer and more pleasant village of Kalaït. Overnight camping. 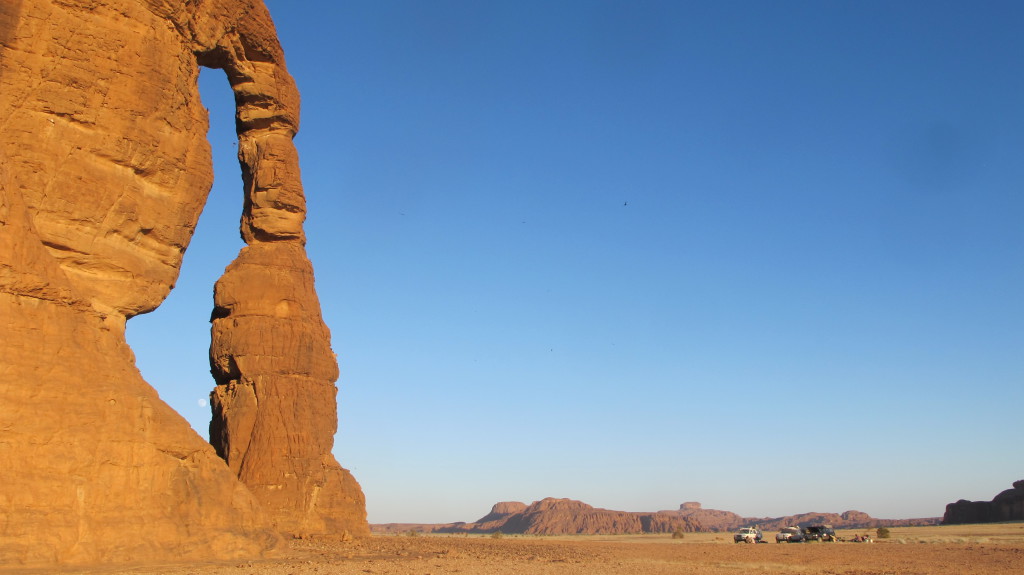 Day 4, 5 & 6: Kalaït – Region Of Archei
We finally reach Kalaït, true Saharan crossroads for its trade, and we aim to north. Now we are in a desert region, on the southern borders of Ennedi, inhabited by populations Gaeda, Tama and Zagawa, semi-nomadic farmers.

We enter into this massive following the direction of the Wadi Archei, gigantic green riverbed with hydro-graphic direction North-East / South-West, lined and bordered by a magnificent series of sandstone Tassillian formations which takes extravagant forms of castles and cathedrals lapped by stripes of sand. 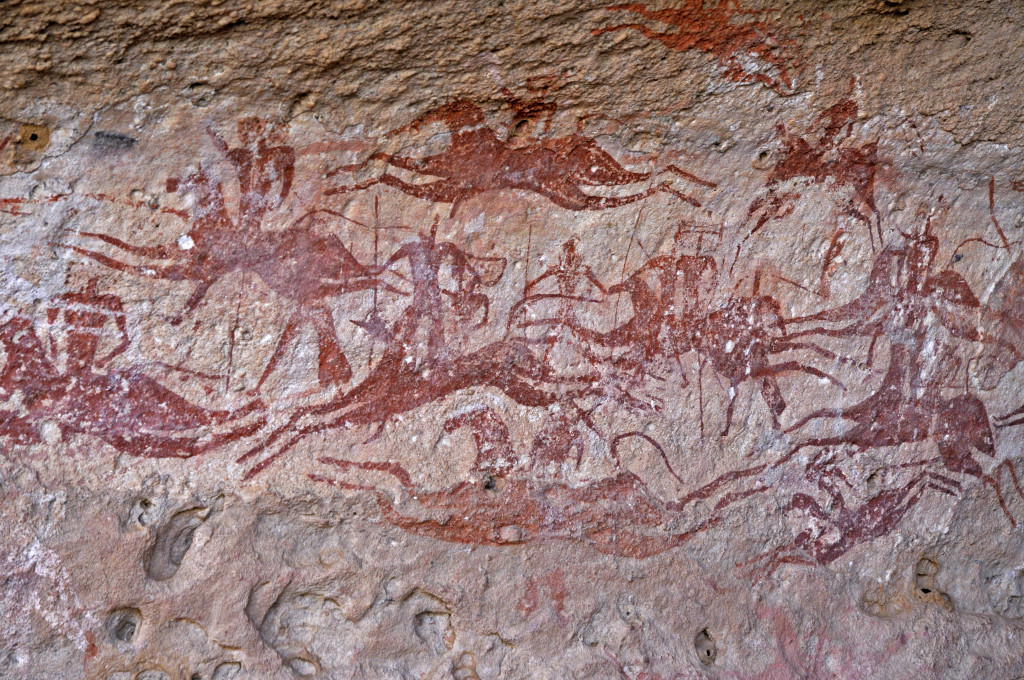 The wadi , which winds for about thirty kilometers, ends in a huge verdant and rocky amphitheater where begin the real gorges of homonym Guelta, permanent water point where you can easily meet Toubou nomads with their herds of camels.

Water point and hub of life, this millennial Guelta is the incredible location of the last living specimens of Saharan crocodiles (Cocodrilus niloticus), evidence of ancient times. In the entire region of Archei, immersed in a landscape of unforgettable beauty, considerable stations of cave paintings are scattered in natural shelters, executed by unknown ancient cultures that leave us the difficult but fun task of ‘interpretation.

We should arrive on the afternoon of 4th day in the region of Terkey, which is the start of the nicest Ennedi rocky area. Overnight camping.

On the 5th day of our Chad tour, we’ll visit the rock art (the “amazing flying horses” and the “big cow”) in Terkey east side, then a visit of Toukou massif with their spectacular arches – close to the Archei canyon there’s again a dramatic paintings cave. Camp in the Archei river bed. Overnight camping. 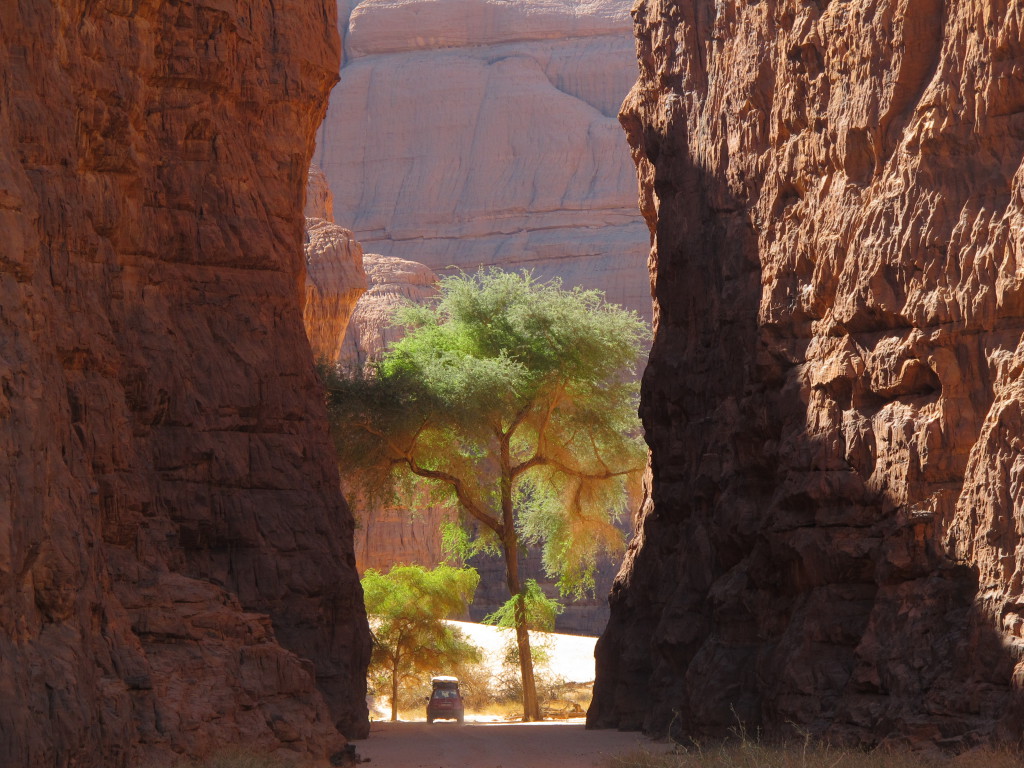 The 6th day we’ll hike (1h30 each way) following a rocky track to reach the best point of view on the Archei guelta where is possible to see the both side of the canyon and enjoy the camel movement and watch the sand crocodiles bathe. In the afternoon, we will follow the Archei river bed (northwest direction) approaching other incredible areas called Bechike and Abayke. Overnight camping. 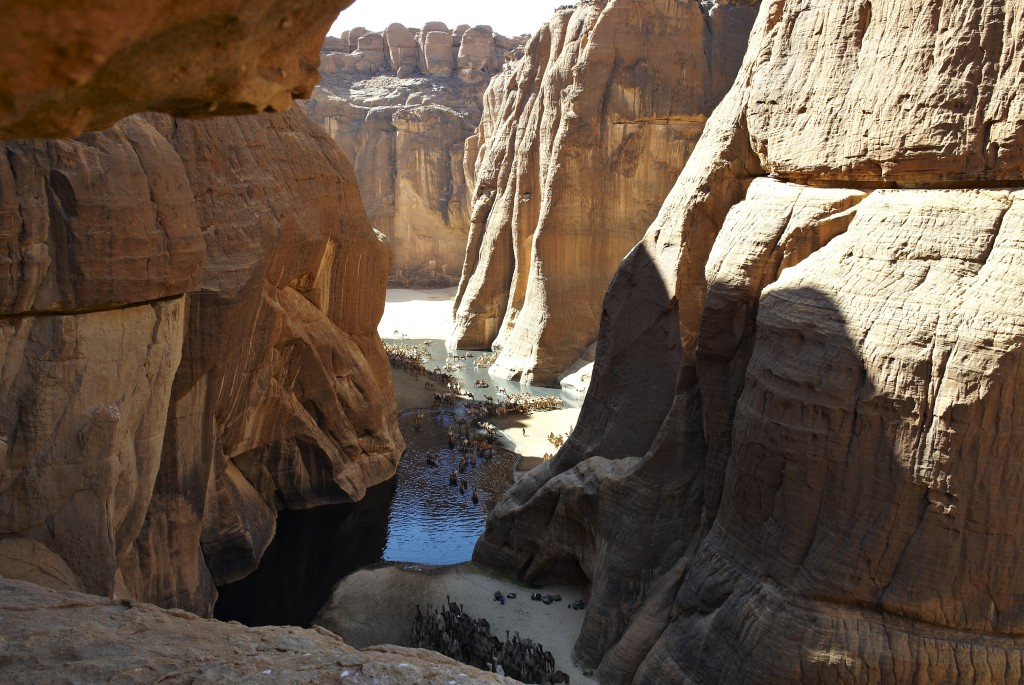 Day 7 & 8: Fada, Mourdi and Derbili
We reach the track joining Monou to Fada, which will be followed northward as far as Fada, prefecture of the Ennedi and characteristic Saharan village formed by houses made of banco, gathered around the old French colonial fort and the little, but animated, market. The inhabited center is situated in a verdant oasis with numerous date-palms.
Once having finished all the bureaucratic formalities – sometimes very long – we are going to start the crossing of the massif, and we will go up along a slow sandy and stony track that will lead us to the Mourdi, a wide region of cordons of dunes and isolated mountainous groups. 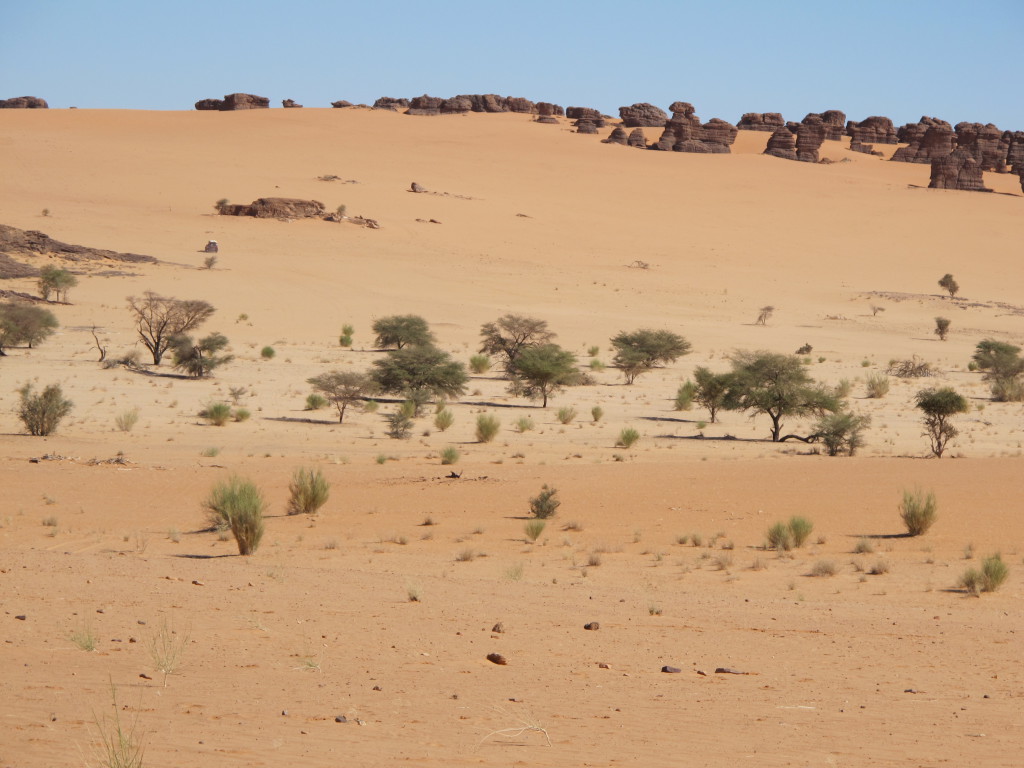 We continue our Chad tour headed in the north/north-east direction, overcoming some difficult cordons of dunes of the Mourdi, following the ancient caravan route that connected the salt-pits of Ounianga region (Demi, Teguedei and Ounianga) to the southern Chadian villages and the northern Libyan oasis. Overnight camping. 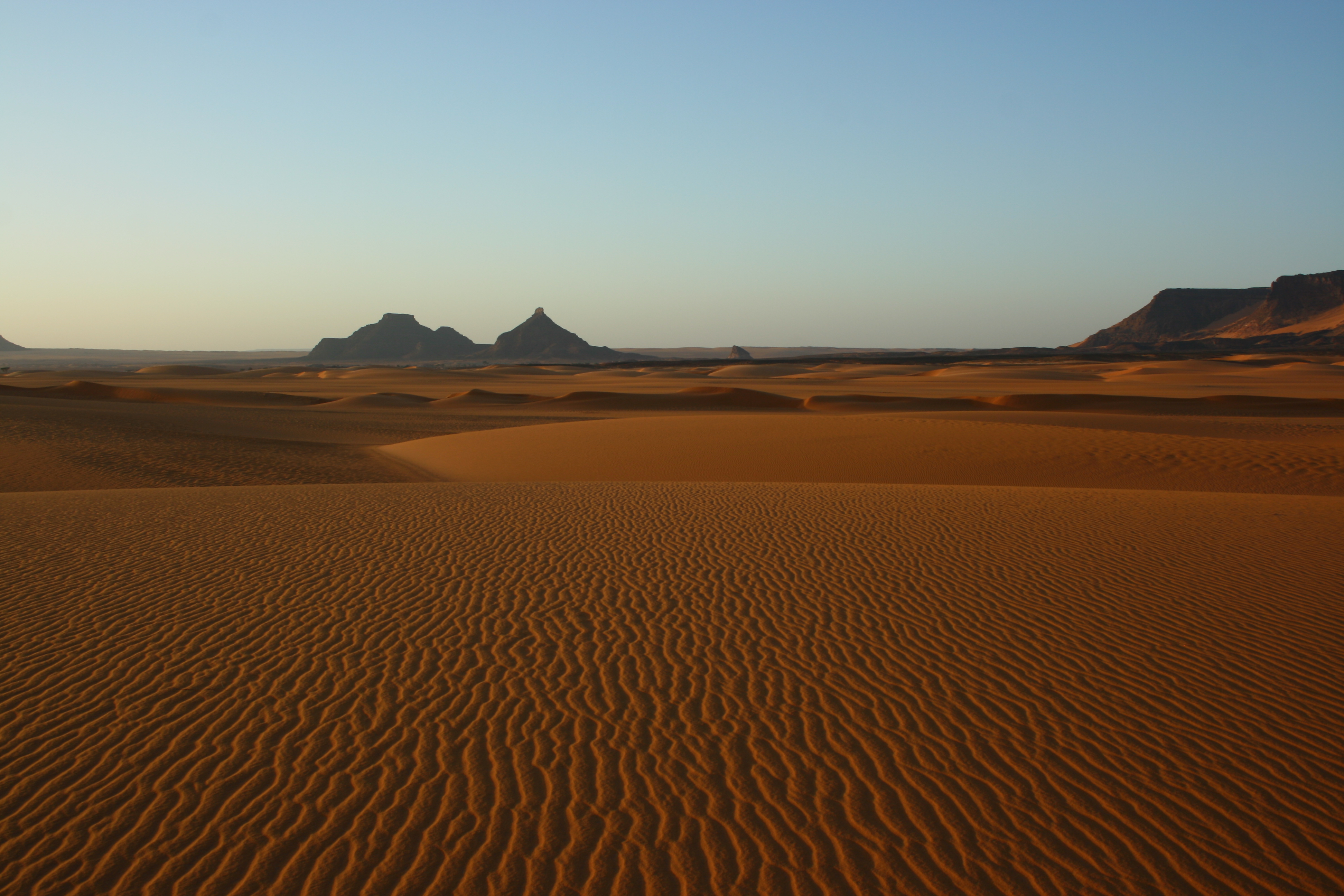 Day 9 & 10: Demi, Teguedei and  Ounianga Lakes
We continue northward until we reach the Eyo Demi, a reddish sandy formation; at its feet rises the homonymous village, composed by a few palms and poor houses made of sand. This inhabited center, situated in a background absolutely wild and inhospitable, lives of the slight trade of “red salt”, obtained with a very rudimentary method of drawing from the open-air salt-pits, which is brought, later, to the southern oasis by the caravans, especially of the Tébu Ounias and, then, exchanged with millet and sorghum. All along this track it is easy to meet one of these caravans.

From Demi we turn to the West, to the Ounianga Serir, passing through Teguedei, a palm-grove inhabited seasonally for the date harvest, as the small silos made of sand and stones, show. In Teguedei there is the first lake of Ounianga region, situated in a sandy basin surrounded by the palms and rocky sceneries of multicolored sandstones. 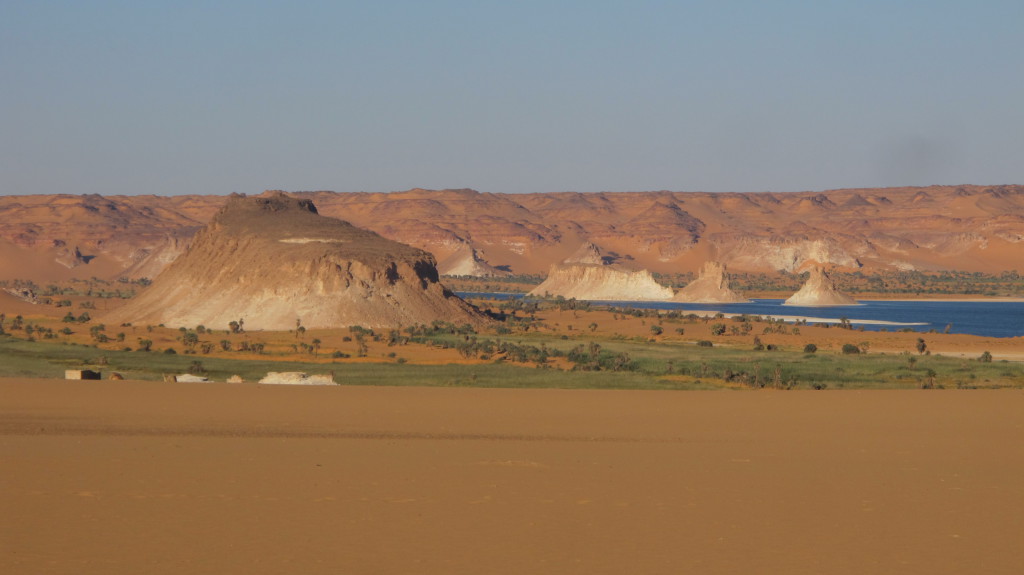 Skirting the Nabar falaise, keeping its right, we reach the first lakes of the Ounianga Serir oasis. The landscape is incredible: lakes surrounded by palm-groves that spring up from the sand, rocky formations of multicolored sandstone from the white to the red and golden dunes that descend to the water, are one of the most amazing visions of the whole Saharan scenery. The water is fresh and comes out from the sand but, because of the salty soil, also the lakes are very salted with several densities and colorings, from the blue to the green, respectively more and less salted. We will spend the whole day making excursions on foot along the sandy banks and the palm-groves with the opportunity of a bath in the lakes.  Overnight camping. 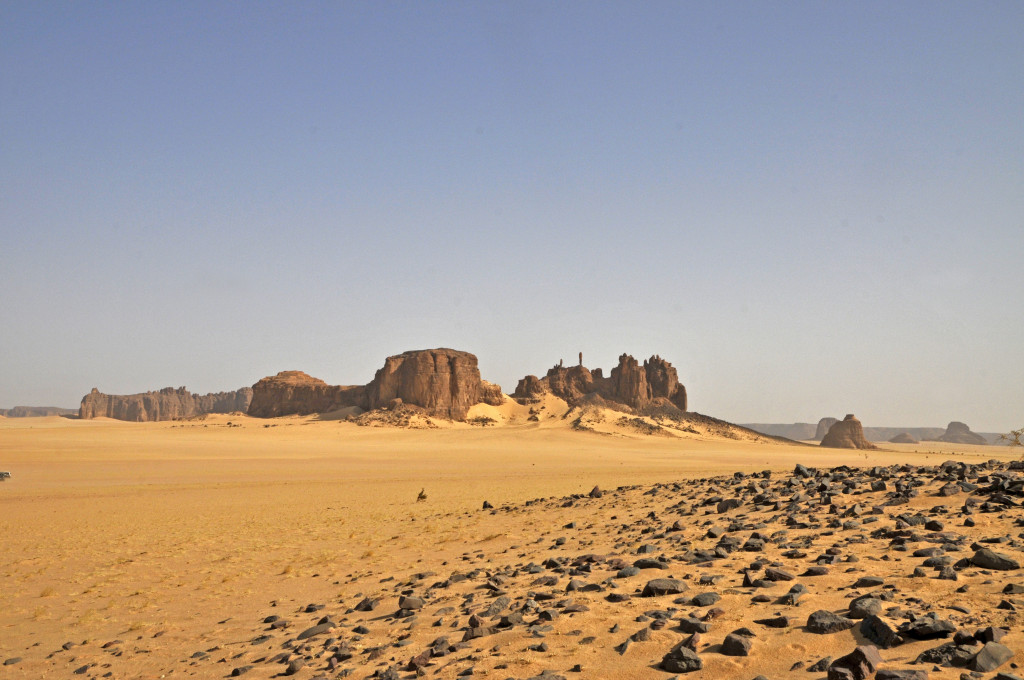 Day 11 & 12: Ounianga Serir, Kora, Bichagara and Kalaït
From Ounianga Serir we head south-west to Kora, one of the entrance gates to the Ennedi massif. The initially barren and bleak landscape becomes more appealing with small Tassili and stripes of sand. The vehicles puff and struggle in this mixed and challenging terrain. After last difficult dunes of Kora, we’ll quickly cross the plane that exceeded the well of Ouei will lead us to the magnificent sandstone cathedrals of Bichagara, stone islands on the west border of the massif, also known for their site of cave paintings. Then we reach the great track which runs along the Ennedi up to Kalaït for the last supplies. Overnight camping. 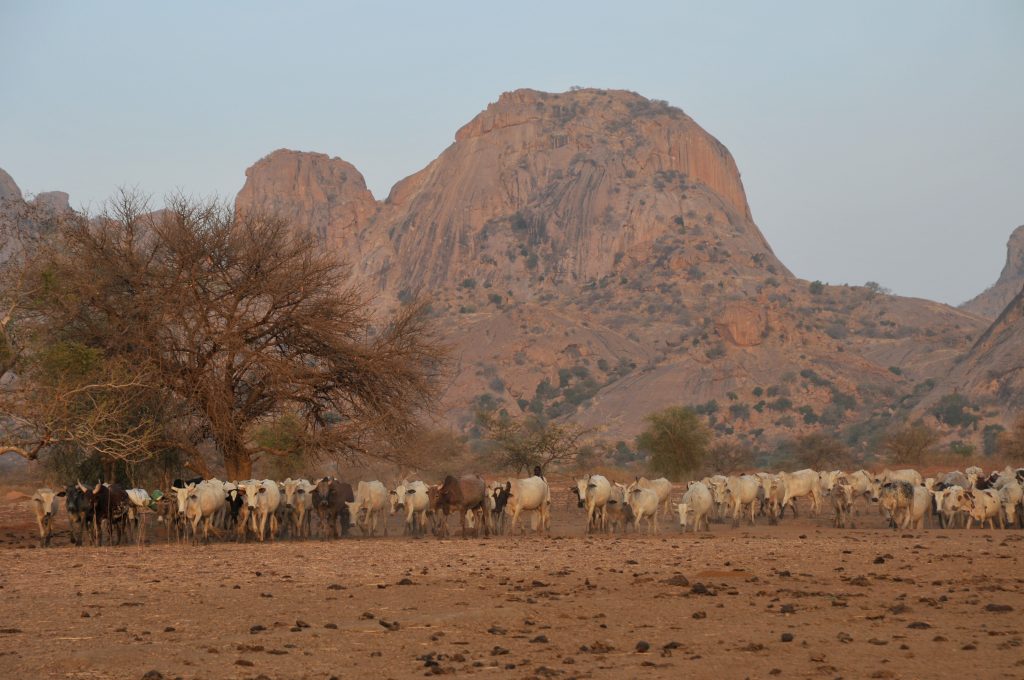 Day 13, 14 & 15: Ouaddai Region, Abeche and Zakouma National Park
From Kalaït we follow a different route, leaving the homelands of the Tubu and entering in a more populated area, encountering Arab nomads and settled villagers. We reach Abeche, Chad’s fourth largest city and the only place of any real size that we encounter since leaving N’Djamena. We have now left the Sahara behind and are in a Sahelian landscape, with acacia trees and large herds of cattle. We continue South/West and we enter in a more lively and populated Africa; nomadic herders gradually make room to stable farmers. We pass through the villages of Oum Hadjer and Mangalmè and we are now in the heart of the Sahel close to limits of Savanna. A fast track will lead us through this untouched Africa until we reach Zakouma National Park, one of the true highlights of our Chad tour. 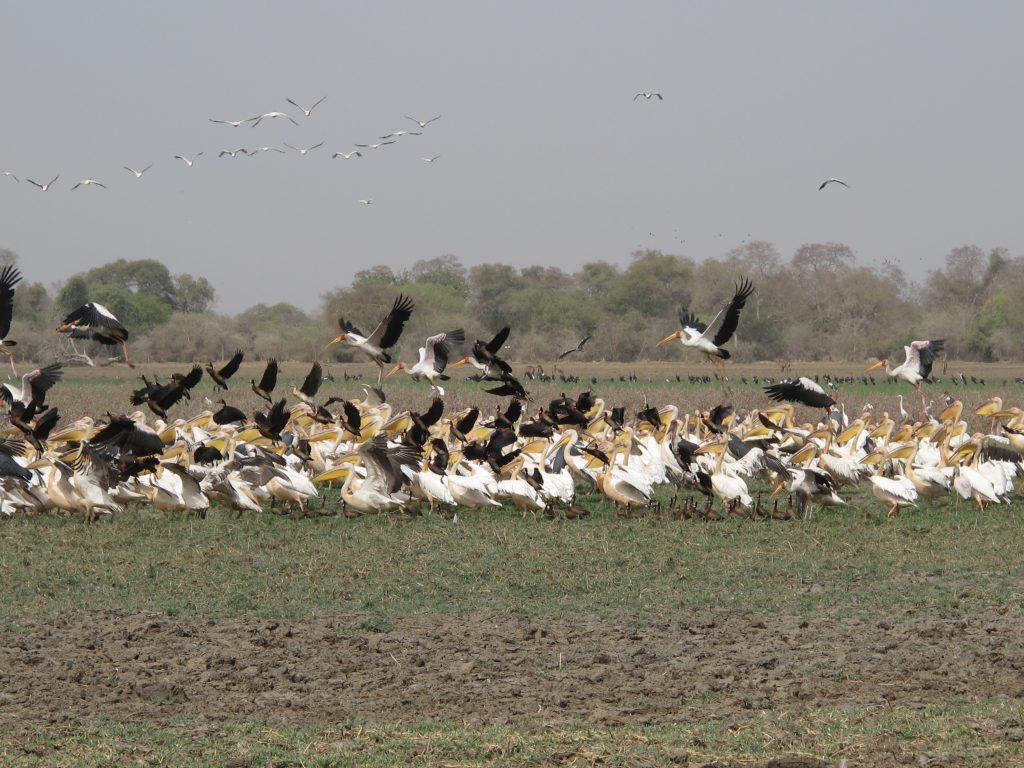 Day 16 & 17: Zakouma National Park
This is a park in the strict sense of the term, where visitors are not voyeurs watching animals in a zoo from the top of a minibus, but where nature is exactly how it should be without the interference of men.

The animals live in a totally natural environment thanks also to the characteristics of the area which, being flooded for about six months of the year, remains inaccessible. We will be able to take advantage of an extraordinary possibility: discover, the thousands of elephants, buffalo’s and antelopes, the nine hundred giraffes, numerous felines and birds that populate this land of our dreams. 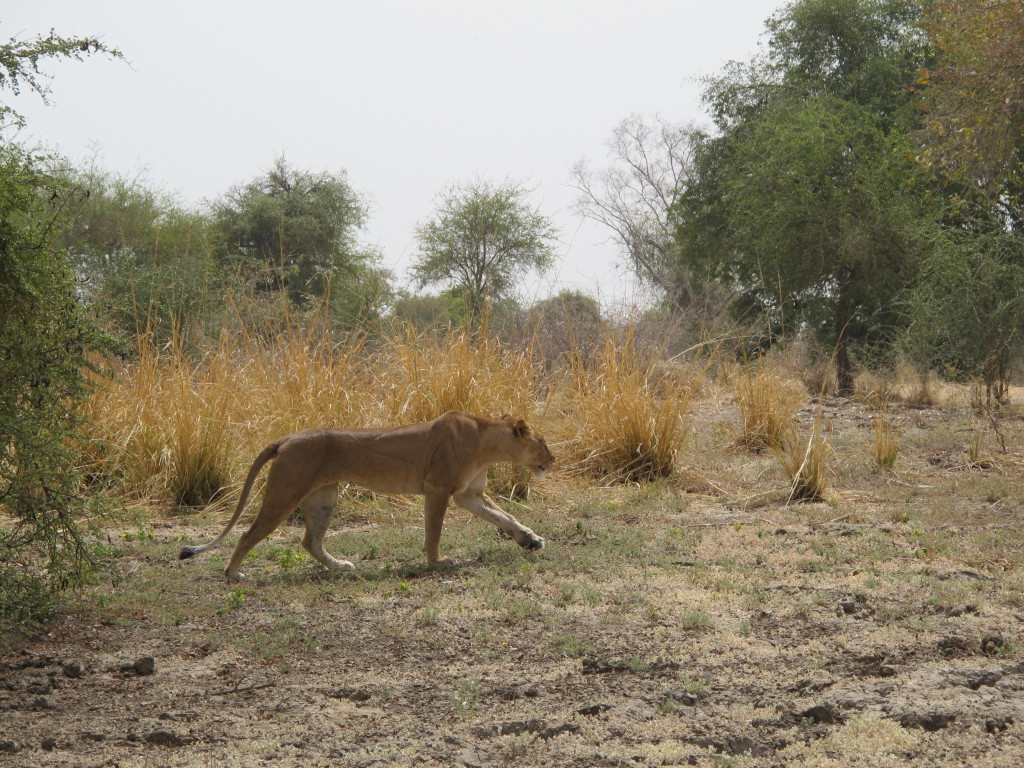 Day 18 & 19: Rural villages, N’Djamena and departure
We leave Zakouma Park to continue north, through a huge Savannah plain, to the village of Mongo, located on the border of the Aboutelfane region, ancient hunting territory, made of a compact hilly ensemble, within which stands the Mount Guedi, 1,500 meters high, furrowed by wide inhabited valleys. We’ll get closer to this hilly set through the most interesting villages of the area. Going west in the direction of Bitkine and Ab Touyour, two small villages with colored and lively markets, places of trade for local people. They are located in a mountainous region, which stands out the pic de Guera; Here assumes great importance the ethnic group of Aadjerai (from Arab “the inhabitants of the stone land”), people who live off agriculture and hunting. Outdoor field-camp on 18th night and arrival in Ndjamena on 19th day, where we will tour the city of N’Djamena and end our Chad tour with a transfer to the airport for our onward flights.