Join us on what we believe is one of the most comprehensive, adventurous, educational and in-depth exploration of Bolivia ever offered.  Spanning just two weeks, we will travel across the vast and ever-changing landscapes where we will be delving into the beauty, cultures, colonial cities, villages, mountains, lakes and epic and diverse wildlife of one of Latin America’s most alluring destinations. 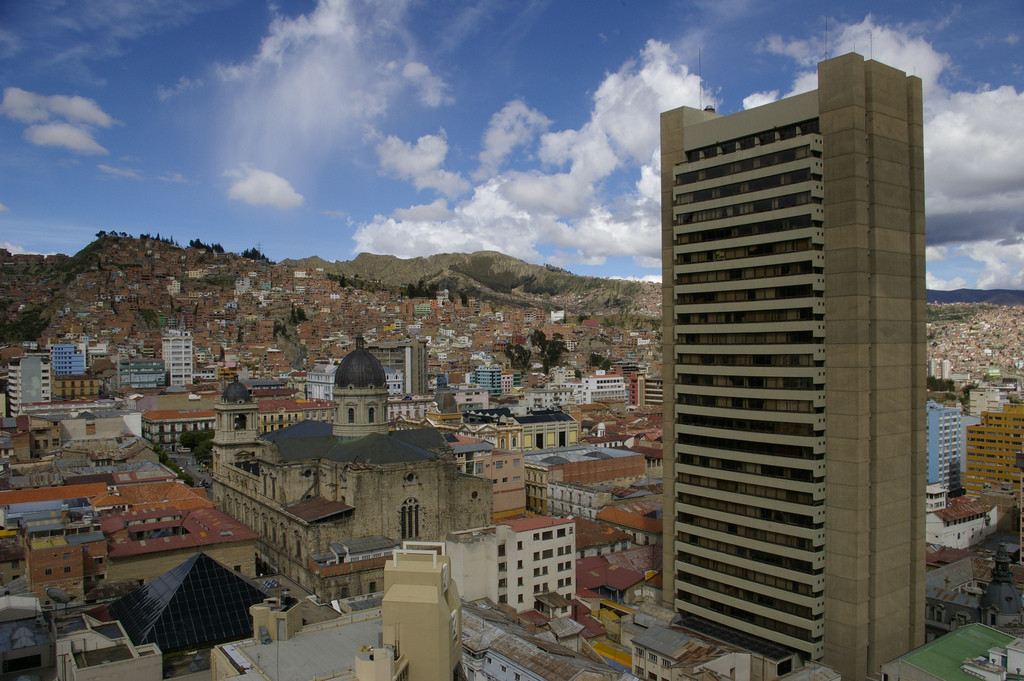 We begin our Bolivia tour with an early morning arrival into La Paz where you will be met by your rep and transferred to the hotel. A full day of sightseeing around La Paz will include the Witches’ Market, where vendors sell everything from Ilama fetuses and dried frogs, Palaza Murillo to see the government buildings and city cathedral, Calle Jaen, which is one of the few places in the city with preserved colonial buildings. 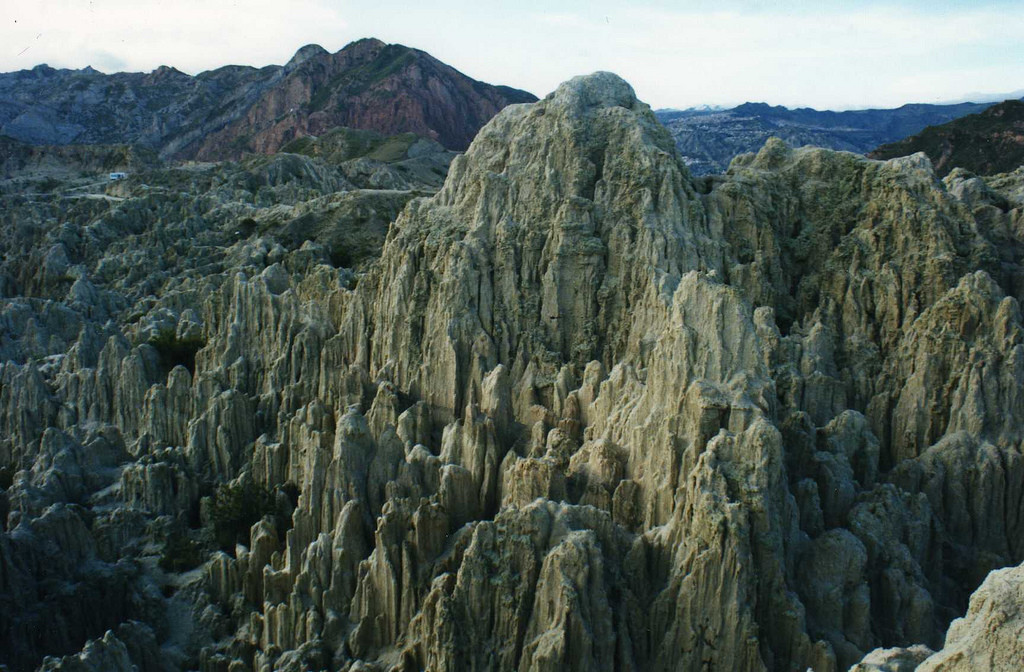 Later, we will make a trip out to Moon Valley (Valle de la Luna), a very beautiful and unique area featuring lunar landscapes and bizarre geological formations, where we will watch the epic sunset. Overnight in La Paz. 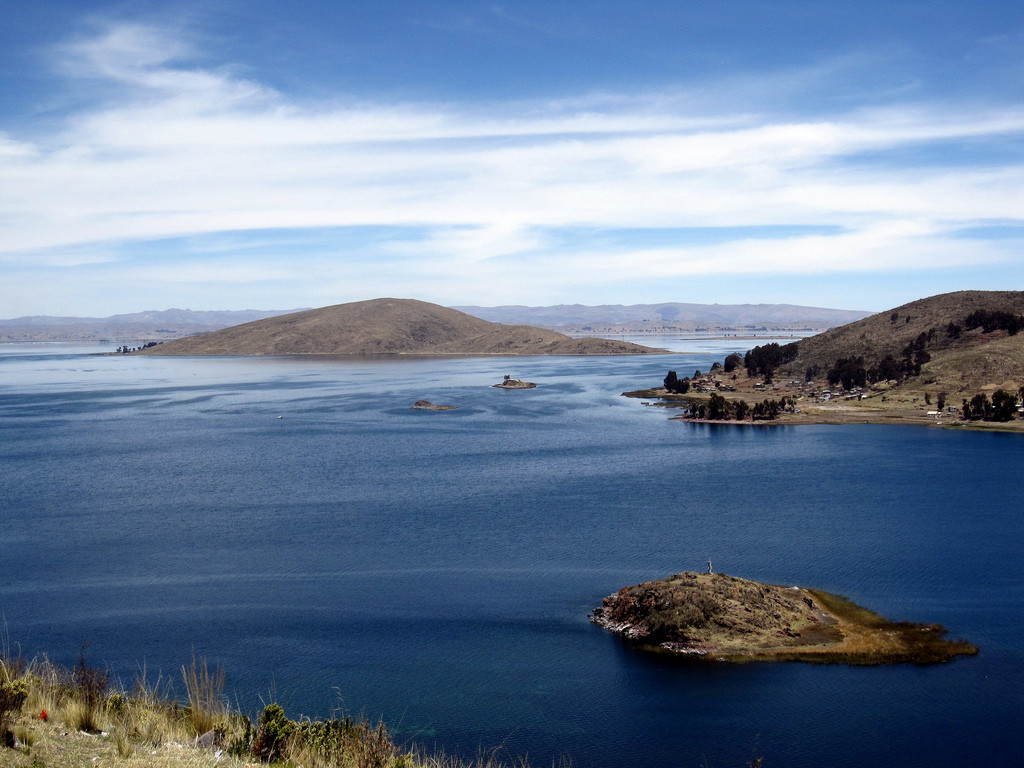 From La Paz, a 4-hour ride through impressive Bolivian landscapes will take us to the ancient Aymara-Quechua shrine of Copacabana, which is also the main Bolivian town on the shores of Lake Titicaca. After lunch at a local restaurant, a local style motor boat will take us for a one-hour ride to the Sun Island (Isla del Sol). 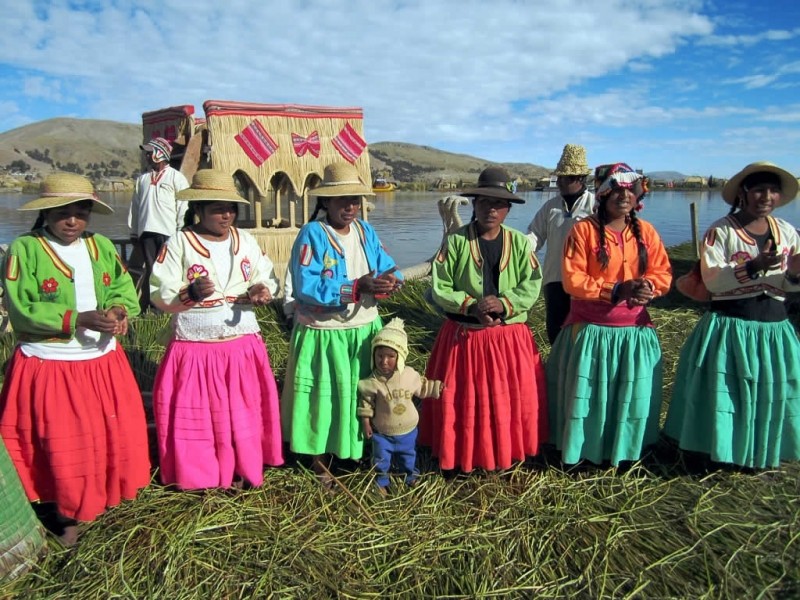 There are no cars or paved roads here, and electricity only reached the tiny villages within the last decade. Even today, the island’s myths and legends are prevalent, and this island suspended in time guards some of the most interesting remains of the ancient pre-Columbian terraces. You’ll learn about these as you trek the ancient ruins hidden in the folds of the steeply terraced slopes of the island. Overnight at local eco-lodge. 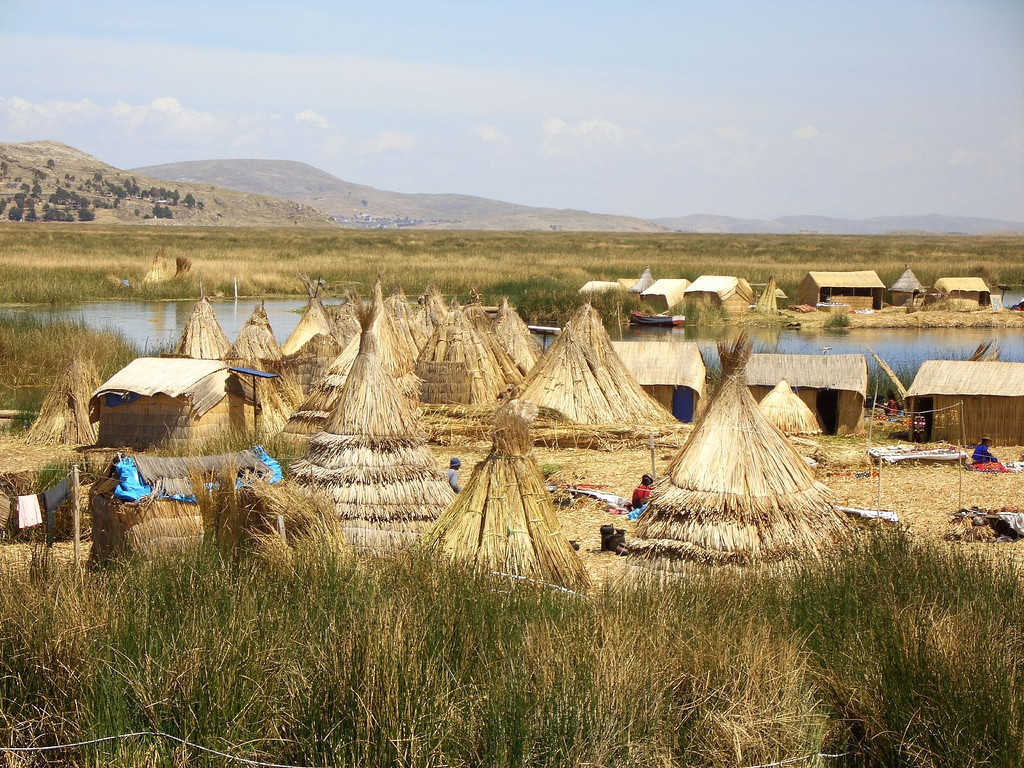 Today on our Bolivia tour, we continue our journey by boat as we cross the lake towards the eastern shore, where we will spend the rest of the day and the night in a traditional fishing and farming community. We will have the opportunity to try out some agricultural practices with our host family and experience what their daily life is like. This is a unique chance to glimpse what real life is like in the Bolivian highlands. Dinner and overnight at a family house.

** Note: Life in the village is rudimentary and we will eat with a local family and stay in a designated guest room within or attached to the main family home, which typically does not have proper running water, plumbing, or electricity. 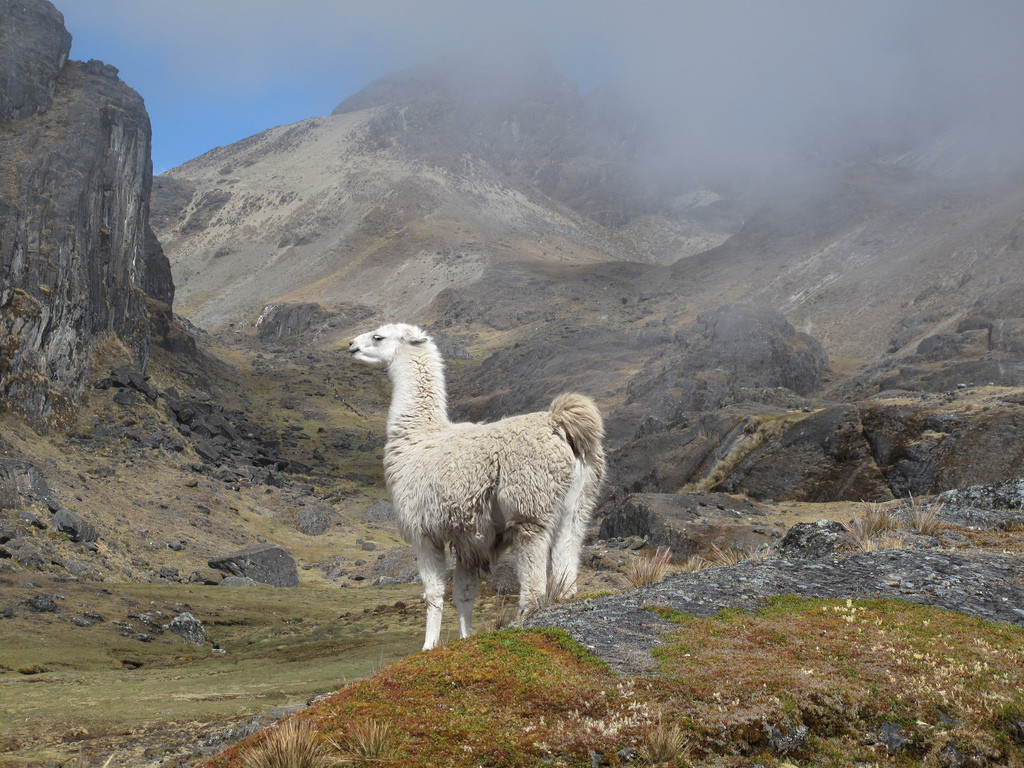 Day 4: Travel Across the Altiplano to Oruro via El Alto

This promises to be a long but spectacular day on the road across the Bolivian Altiplano. The day begins with superb views of Lake Titicaca, then we skirt the snow-capped peaks of the Cordillera Real (Royal Cordillera) until we reach the Altiplano city of El Alto near La Paz. 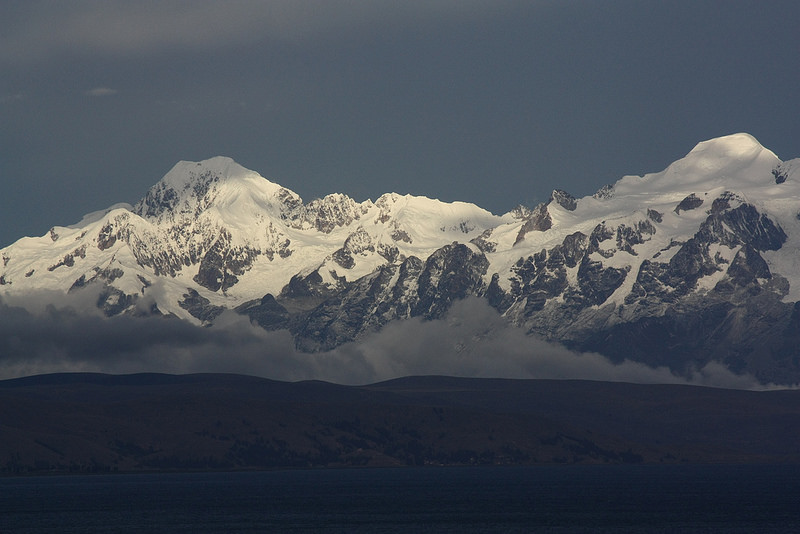 From there we travel along the main road that links to the mining center of Oruro where we will spend the night. Most of the day will be spent at approximately 3700 meters above sea level. 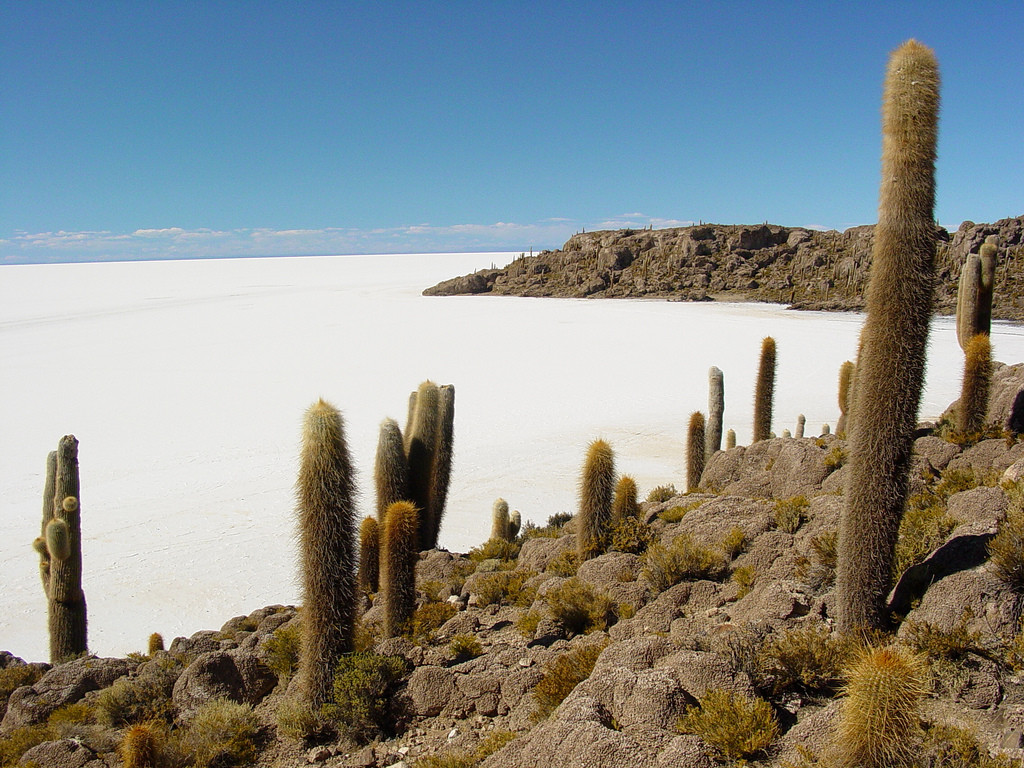 The vast windy plateau and arid steppes of the central Andes known as Altiplano that extends around Oruro is one of the most surprising geographical features of this part of the world. This is where the oriental (eastern) and occidental (western) ranges of the Andes are at their widest. The scrub vegetation stretches 600km to the south to Chile and Argentina, boasting an unexpected array of wildlife as well as a few small settlements here and there including some interesting cultural sights, such as the colonial churches in the vicinity of Pampa Aullagas. 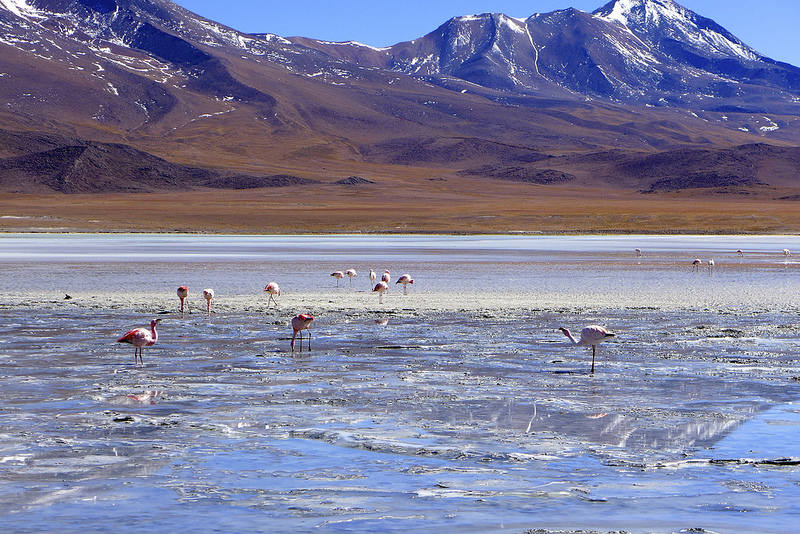 At the end of the day, we will drive along the slopes of Mount Tunupa (5,432 m) which stands on the northern shore of Salar de Uyuni. This dormant volcano is the main geographic feature and a much revered sacred site in this part of the Andes. Expect stunning scenery as the night falls over the salt flats. Overnight at a local lodge on the foothills of Mt. Tunupa. 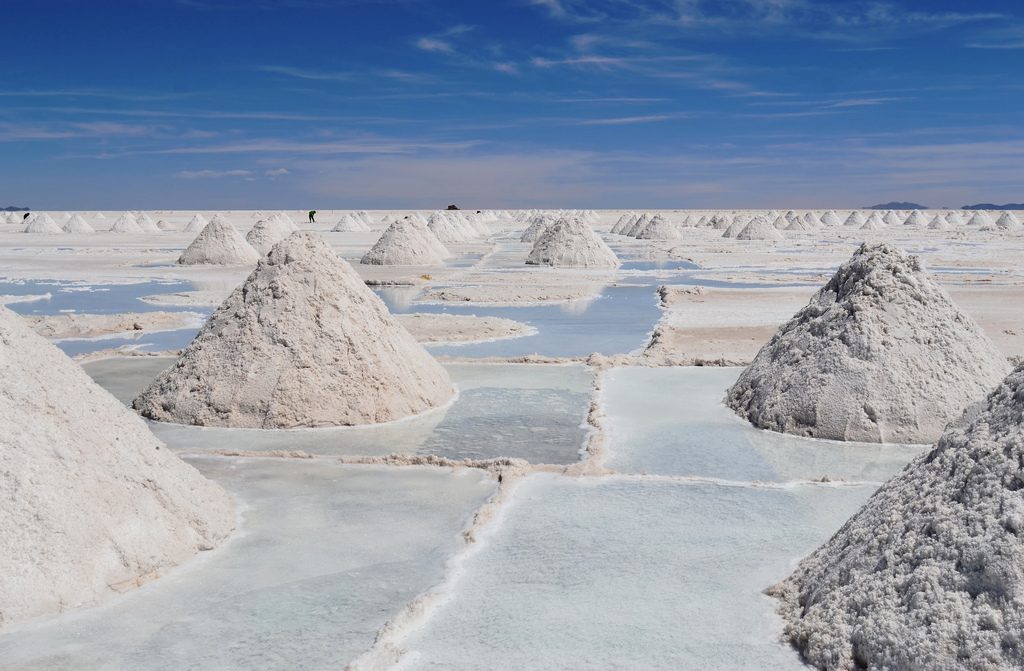 An early start today on our Bolivia tour will enable us to make the most of our morning at Salar de Uyuni. This starkly barren landscape is nothing but a beautiful white blanket stretching to the horizon, where snowcapped mountains shimmer under deep-blue skies. With scant rainfall and infertile soils the lake shores support only a sparse rural population, and there are no roads across the salt flats, only seasonal tracks left by a few jeeps that take adventurers like us to experience this other worldly place. Here the silence is complete; no sound here except the crush of salt crystals beneath your feet. 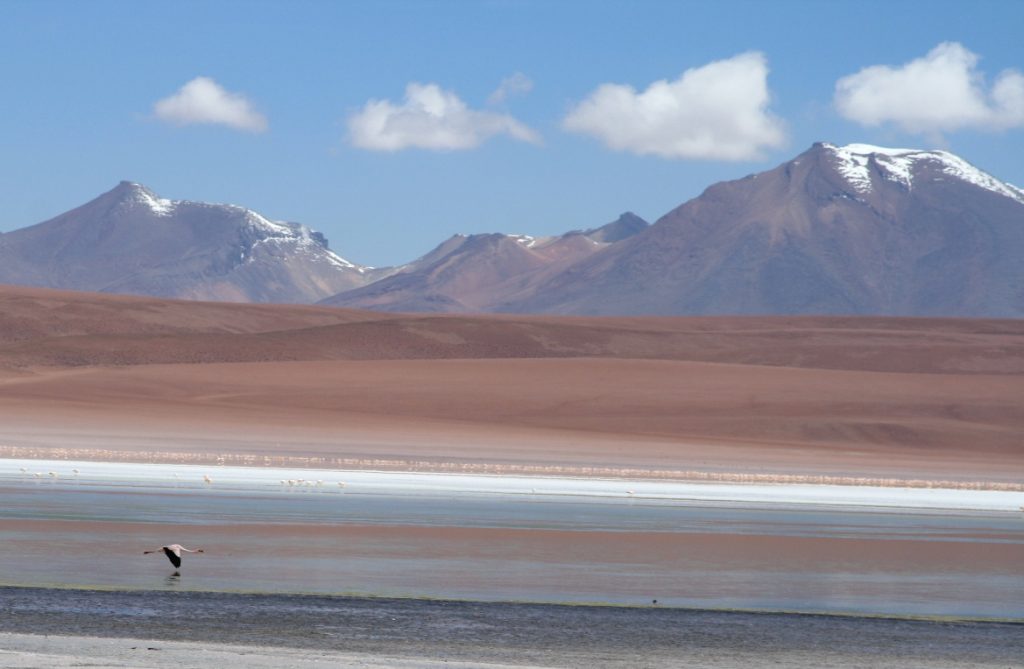 After a picnic lunch in the middle of nowhere, we head to the small town of Uyuni on the eastern shore of the Salar. From there it’s a 3-hour drive to the colonial city of Potosi where we will spend the night at an ancient hacienda. 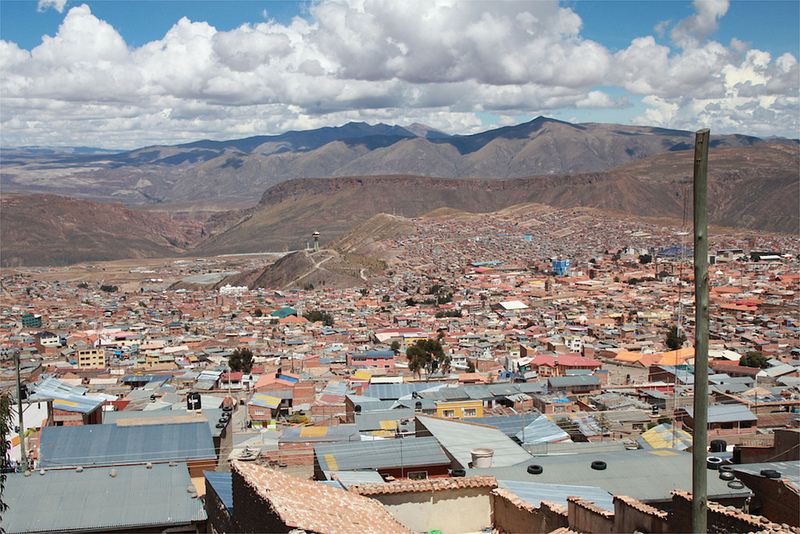 We will begin this morning of our Bolivia tour by walking the narrow streets of this historic city, which during its mining heyday in the 17th century, Potosí was the biggest city in the Americas. Silver from Potosí was taken to Spain and used all over Europe.  After lunch, we will take a very scenic 3-hour drive across the Andes to Sucre, the first capital of Bolivia. Founded by the Spanish in the first half of the 16th century, its many well-preserved 16th-century religious buildings illustrate the blending of local architectural traditions with Spanish styles. Overnight at a restored colonial mansion in Sucre. 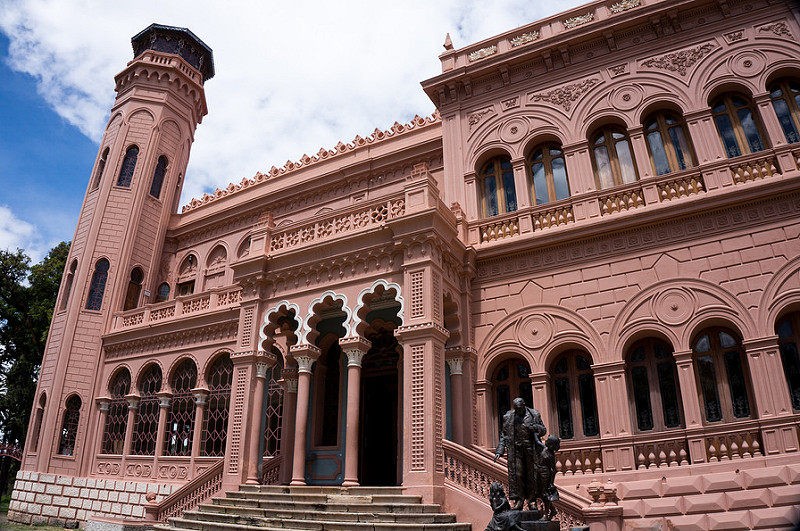 Day 8: Sucre and nearby villages

The valleys surrounding Sucre are home to traditional weaving communities, whose way of life hasn’t changed in centuries. The handicrafts and colorful handmade textiles (locally known as aguayos) of the Sucre area are famous throughout Bolivia and abroad. These ages-old art forms and techniques can be seen today in every corner and indigenous settlements in the region such as in the ancient villages of Tarabuco, Jatun Yampara, Potolo and others. We will visit some of these remote settlements and meet with the locals to learn about their crafts and their everyday life in this part of the Andes. Overnight at local community-run lodge. 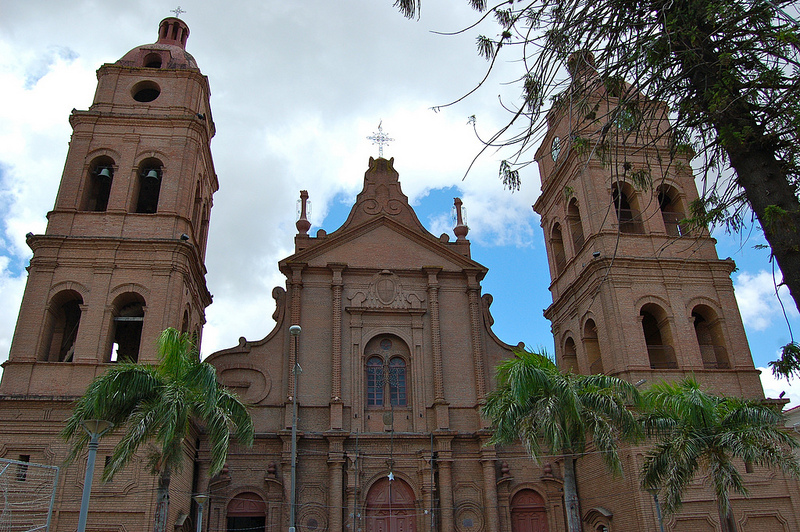 After breakfast in the village, we will drive back to Sucre on time for our short flight to Santa Cruz de la Sierra. At 416 meters above sea level, Santa Cruz is located in the Eastern Lowlands of Bolivia. It is warm and distinctly tropical most of the year, and is a perfect tropical spot for wildlife viewing and birding. 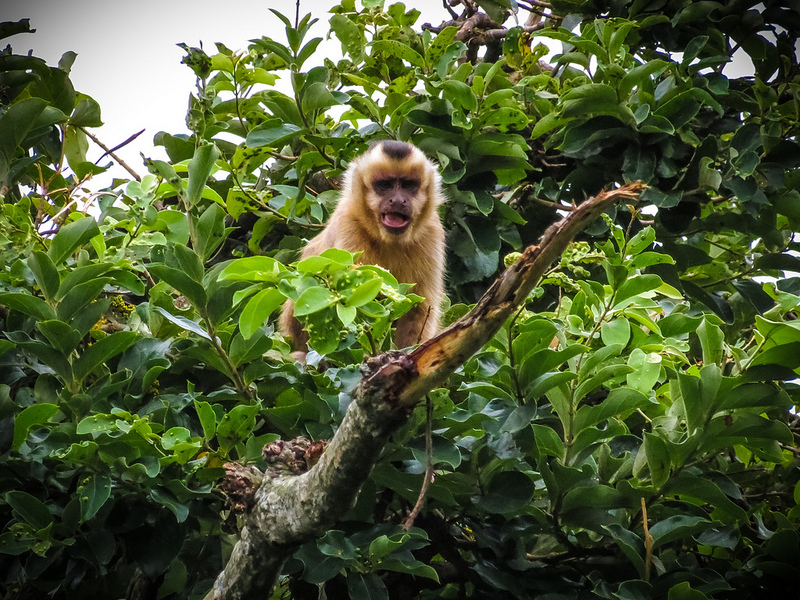 After settling in our hotel, we will head out for the afternoon to the outskirts of the city to see sloths, monkeys and other wildlife at one of the natural preserves around Santa Cruz, such as the botanical gardens, La Rinconada park and Biocentro Guembé. Overnight in Santa Cruz. 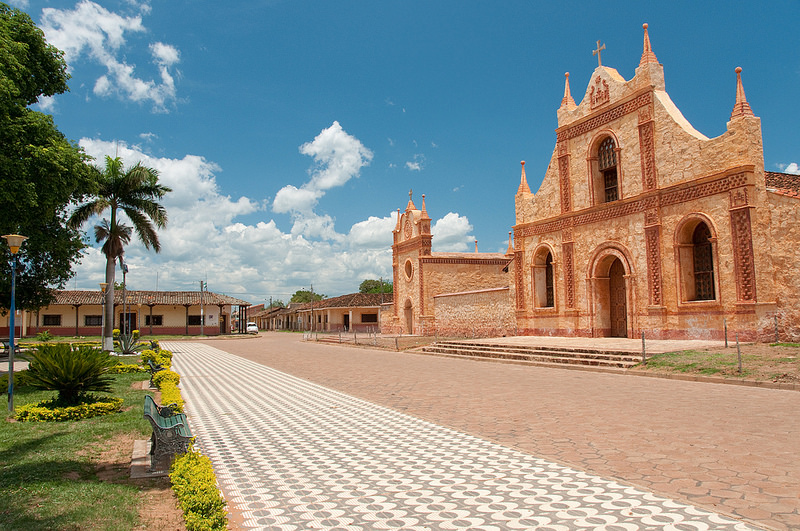 The numerous indigenous tribes in the eastern lowlands of Bolivia were traditionally hunters and gatherers. In the 18th century the Jesuits settled these people into groups called reducciones (reductions). Several thousand native people were organized into productive units that were a type of socialist society. Some considered the groups little utopias. Architects, sculptors and musicians were brought from Europe to help build the churches and the community. The local people proved to be talented artisans and musicians. The prosperity of the missions caused political issues within the Catholic church and the Jesuits were expelled from South America in 1767. Nowadays, the Jesuit Missions of the Chiquitos are truly monumental treasures and are officially listed as a UNESCO World Heritage Site, and a true highlight of our Bolivia tour. 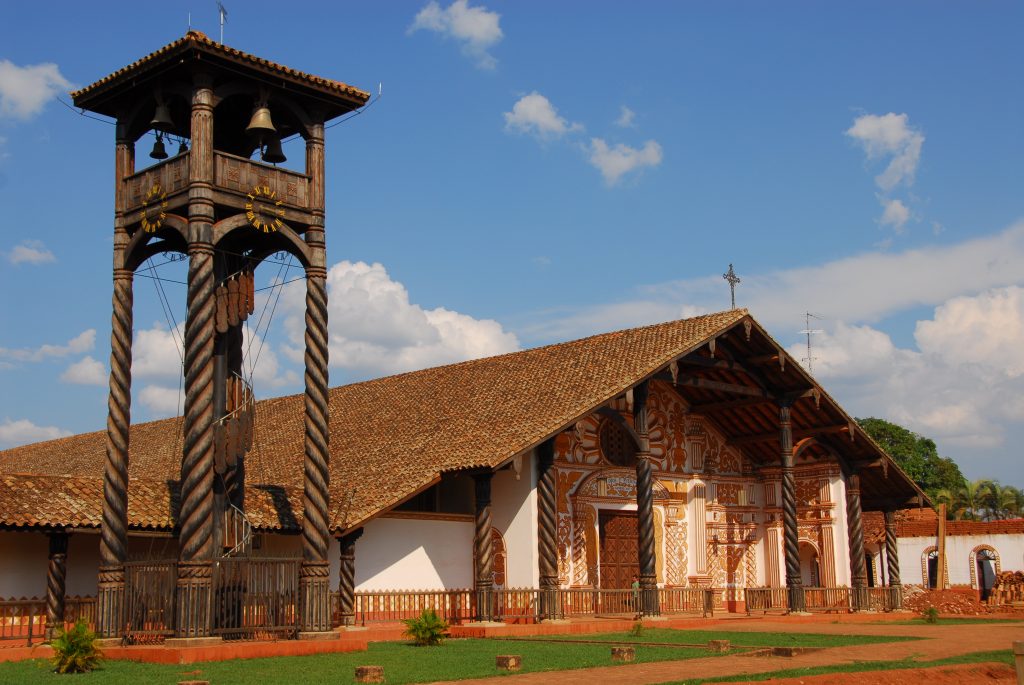 Our in-depth excursions throughout the next few days will combine history, religious art, culture, and beautiful countryside as found in very few other parts of the world. 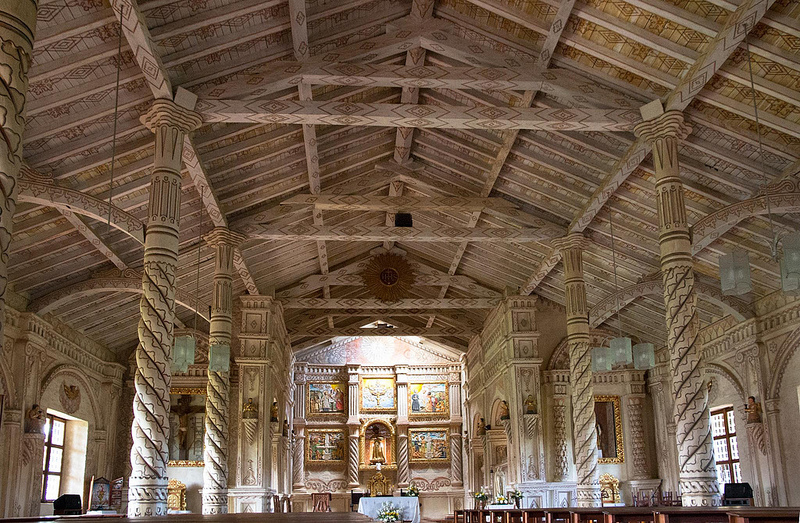 We also plan to visit to a local Mennonite community, which are a relatively unknown religious community of European descent, in eastern Bolivia. As the 21st century brings modernity almost everywhere, the Mennonite way of life has remained relatively unchanged for decades and even centuries, with this group choosing to live in isolated farming communities and remaining fiercely protective of their privacy. There are an estimated 70,000 Mennonites residing in Bolivia.

Throughout our time in this deeply interesting part of Bolivia, we will have overnight stays in Concepción, San Ignacio and San José.

San José de Chiquitos is located halfway between Santa Cruz to the west and Puerto Suarez and the border with Brazil to the east. The town is in many ways reminiscent of Santa Cruz 50 or more years ago. San José itself retains the feel of a dusty, frontier town, with its few unpaved streets and even fewer cars.

A short but worthwhile trip from San José is to the Parque Histórico Santa Cruz la Vieja. The park’s heavily forested hills offer good walking with grand views. They contain much animal and bird life, including scarlet macaws and toucans, and interesting vegetation such as the aromatic guayacán and palo santo trees. Here too are barely discernible ruins of the original site of Santa Cruz, dating from about 1540. There’s a lookout point giving views over the jungle, all the way to the mysterious Kaa-Iya National Park, the hemisphere’s largest.

We will then drive approximately 5 hours (270km) back to Santa Cruz, depending on stops en route. We should be back in Santa Cruz in the late afternoon. 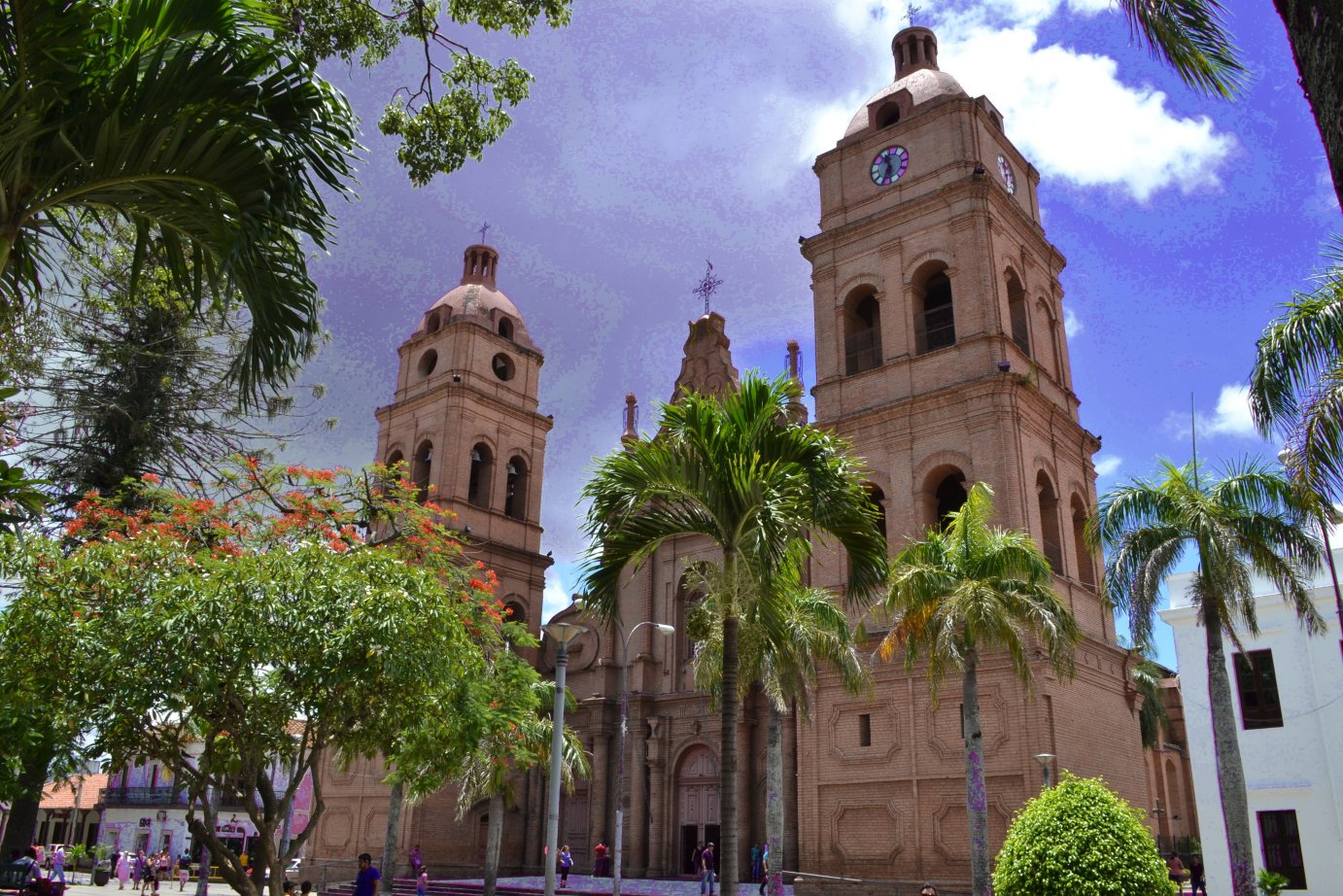 We will enjoy a final breakfast together as a group and bid farewell to the beautiful and exotic country of Bolivia and be transferred to the airport for our onward flights. 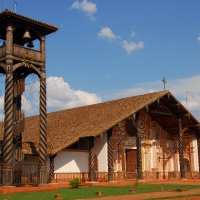 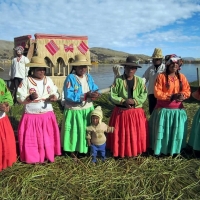 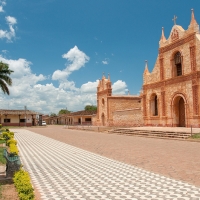 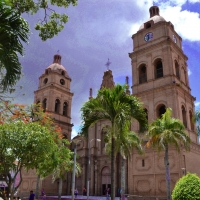 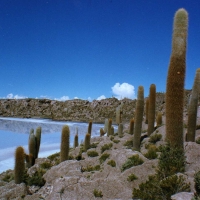